Former Bourkevale president Bob Pyne was considered the key figure in the establishment of the Bourkevale Community Centre. It's probably why he was the only person to ever receive a lifetime membership to the club — at a time when a nominal family fee was required to be a member of the facility — and why a memorial trophy was named after him.
The Bob Pyne Trophy was handed out to area kids who not only showed athletic prowess in their chosen sport, but who also demonstrated outstanding civic duty. The trophy was first awarded in 1969 to local hockey player Billy Moir many years after Mr. Pyne's involvement in the club. The award was meant to commemorate Mr. Pyne and to celebrate his dedication to amateur sport and his commitment to community building.
Mr. Pyne lived at 1860 Assiniboine Avenue, a stone's throw from Bourkevale. He was part of the board that existed before the community centre even had a clubhouse. Mr. Pyne did most of the groundwork to obtain the new clubhouse and even offered to lend Bourkevale $1,000 of his own money to help finance the transaction. In the end he loaned the club $500 to help finance the $4,000 price tag to purchase part of an "H-hut" from the airport, transport it down Ferry Road, install it on footings at Bourkevale and refurbish it into a clubhouse. His loan was repaid the following year with no interest.
Mr. Pyne was born in Moose Jaw, Saskatchewan and attended St. John's College in Winnipeg and Appleby College in Oakville, Ontario. He worked for the Canadian Pacific Railway and served his country during WW II. Mr. Pyne's wife Lena Pyne was also very much involved in Bourkevale Community Club. His son Robert Pyne played baseball for Bourkevale.
Mr. Pyne passed away June 1, 1963 at his winter home in Florida.
Bob Pyne was not only a dedicated and civic-minded member of the Bourkevale community, he was a leader whose efforts were instrumental in creating a community centre that continues today to bring families together in the Bourkevale area.

The following is his obituary from the Winnipeg Free Press:

ROBERT ALBERT PYNE
Suddenly on June 1st. 1963. at
his winter residence in Hollywood,
Florida. Robert Albert
Pyne. of 1860 Assinlboine Ave.,
St. James, beloved husband of
Lena (Anderson) Pyne. Mr.
Pyne was born in Moose Jaw
and obtained his education at St.
John's College, Winnipeg, and
Applcby College, Oakville, Ont.
On completion of his education,
Mr. Pyne joined the Canadian
Pacific Railway and served in
many capacities until his health
forced an early retirement. He
served overseas with the Canadian
Engineers in World War
II returning with the rank of
captain. Mr. Pyne was a member
of Tonic Lodge and of the
Shrine. Surviving him besides
his wife is a son. Robert A.
Pyne. of Vancouver, and a grand
son, Robert A. Pyne IV; three
sisters. Mrs. J. E. Perkins. Mrs.
T. E. Holland and Mrs. J. E.
Toole. all of Winnipeg. Funeral
services will be held in Hollywood,
Florida.

The following is her obituary from the Winnipeg Free Press: 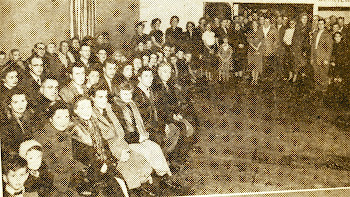